Pattabhi Jois remained in Mysore and married a young woman named Savitramma (but who came to be known as Amma), on the full moon of June 1933 when Pattabhi Jois was 18 years old. In 1948 they, with the help of Pattabhi Jois’ students, purchased a home in the section of town called Lakshmipuram, where they lived with their children Saraswathi, Mañju and Ramesh. He held a teaching position in yoga at the Sanskrit College of Maharaja from 1937 to 1973, becoming vidwan (professor) in 1956, as well as being Honorary Professor of Yoga at the Government College of Indian Medicine from 1976 to 1978. He taught there until 1973, when he left to devote himself fully to teach yoga at his yoga shala. He had studied texts such as the Patañjali Yoga Darśana, Haṭha Yoga Pradīpikā, Yoga Yajñavalkya and the Upaniṣads, and in 1948, he established the Ashtanga Yoga Research Institute at their new home in Lakshmipuram.

His first trip to the West was in 1974 to South America, to deliver a lecture in Sanskrit at an international yoga conference. In 1975 he stayed for four months in Encinitas, California, marking the beginning of Ashtanga Vinyasa Yoga in the US. He would return to the US several times over the next 20 years, to teach yoga at Encinitas and beyond.He also regularly travelled to Sydney, Australia, and New Zealand where some of his advanced students were based. He wrote the book Yoga Mālā, in Kannada in 1958, and it was published in 1962, but was not published in English until 1999.  Pattabhi Jois continued to teach at the Ashtanga Yoga Research Institute in Mysore, now located in the neighbourhood of Gokulam, with his only daughter Saraswathi Rangaswamy and his grandson Sharath, until May 18, 2009 when he died aged 93 of natural causes. 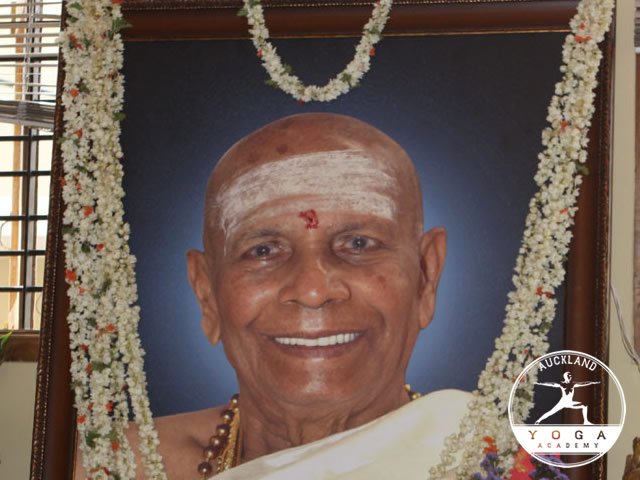