Krishnamacharya was born on November 18, 1888 in Muchukundapuram, situated in the Chitradurga district of present-day Karnataka, in South India, to an orthodox Iyengar family.

Krishnamacharya spent much of his youth traveling through India studying the six darśana or Indian philosophies: vaiśeṣika, nyāya, sāṃkhya, yoga, mīmāṃsā and vedānta. In 1906, at the age of eighteen, Krishnamacharya left Mysore to attend the university at Benares, During all this time Krishnamacharya continued to practice the yoga that his father had taught him as a young boy. Krishnamacharya also studied with the yoga master Sri Babu Bhagavan Das and passed the Samkhya Yoga Examination of Patna. During his vacations, which would last about three months, Krishnamacharya made pilgrimages into the Himalayas. At the suggestion of Gaṅgānāth Jhā, Krishnamacharya sought to further his yoga studies by seeking a master named Yogeshwara Ramamohana Brahmachari, who was rumored to live in the mountains beyond Nepal. After two and a half months of walking, Krishnamacharya arrived at Sri Brahmachari’s school, a remote cave at the foot of Mount Kailash, where the master lived with his wife and three children. Under Brahmachari’s tutelage, Krishnamacharya spent seven and a half years studying the Yoga Sūtras of Patañjali, learning āsanas and prāṇāyāma, and studying the therapeutic aspects of yoga”. He was made to memorize the whole of the Yoga Kuruntha in the Gurkha language. As tradition holds, at the end of his studies with the guru, Krishnamacharya asked what his payment would be. The master responded that Krishnamacharya was to “take a wife, raise children and be a teacher of Yoga”.

Krishnamacharya married Namagiriamma in 1925. It was after a lecture on the Upaniṣads in Mysore town hall in 1931 that he attracted the attention as a learned scholar that eventually led to his employment at the palace. Impressed with Krishnamacharya’s knowledge as a scholar and his mastery of yoga, Amarnātha Jhā, the son of Gaṅgānāth Jhā, introduced Krishnamacharya to various monarchs, and he was widely honoured by them. During the 1920s, Krishnamacharya held many demonstrations to stimulate popular interest in yoga. These included suspending his pulse, stopping cars with his bare hands, performing difficult asanas, and lifting heavy objects with his teeth. The Palace archive records show that the Maharaja was interested in the promotion of yoga and continually sent Krishnamacharya around the country to give lectures and demonstrations. In 1931, Krishnamacharya was invited to teach at the Sanskrit College in Mysore. The Maharaja, who felt that yoga had helped cure his many ailments, asked Krishnamacharya to open a yoga school under his patronage and was subsequently given the wing of a nearby palace, the Jaganmohan Palace, to start the Yogashala, an independent yoga institution, which opened on August 11, 1933.

In 1952 Krishnamacharya relocated to Madras, Krishnamacharya was in his sixties, and his reputation for being a strict and intimidating teacher had mellowed somewhat. In Madras, Krishnamacharya accepted a job as a lecturer at Vivekananda College. He also began to acquire yoga students from diverse backgrounds and in various physical conditions, which required him to adapt his teaching to each student’s abilities. For the remainder of his teaching life, Krishnamacharya continued to refine this individualized approach, which came to be known as Viniyoga. At the age of 96, Krishnamacharya fractured his hip. Refusing surgery, he treated himself and designed a course of practice that he could do in bed. Krishnamacharya lived and taught in Chennai until he slipped into a coma and died in 1989, at one hundred years of age. His cognitive faculties remained sharp until his death; and he continued to teach and heal whenever the situation arose. 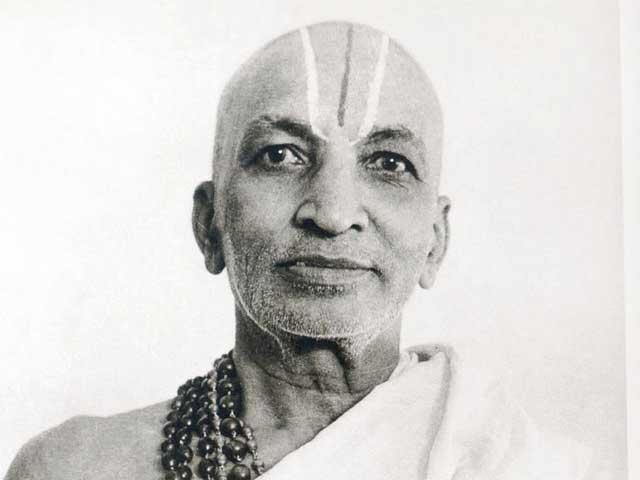