Life in India – an Experiential Tale: An interview with Jude (Yoga Teacher) by Bernadette Rae 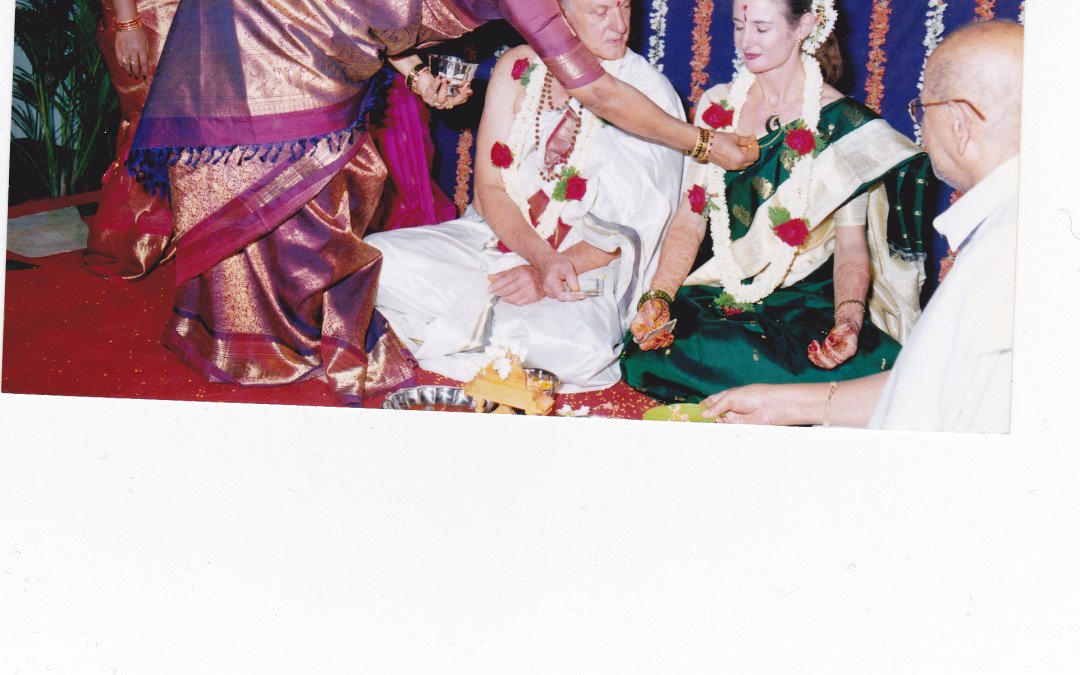 A serious commitment to the ashtanga Yoga practice inevitably precedes the decision to head for Mysore and the guru, Sri Pattabi Jois. But nothing can really prepare first-time-to-India students for life outside the super-intense but still familiar routines of the yoga room. 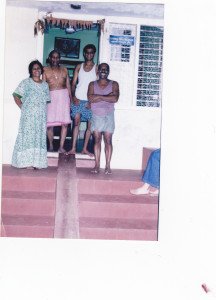 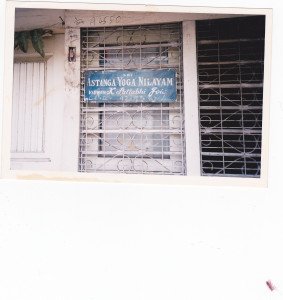 “I tripped and stumbled about staring for two weeks on my first visit”, says Jude Hynes, a senior teacher at the AYA and partner of Peter. “I felt as if I was on a LSD trip or something”, she says, of her initial reaction, in 1996, to the heat, the pollution, the decibels, the pongs, the teeming life – human, canine, and holy bovine – that make up the potent magic of Mysore.

That year Jude and Peter stayed with the Achars, a family who often take visiting Yoga students into their home. Jude forged a particularly close relationship with “Amah” (or “Mother” Achar) over cooking lessons in the cool, marble kitchen. Communication was often difficult: sometimes it took three weeks and several conversations to reach understanding on a more subtle point.

“But on another level we spoke the very same language”, Jude says. “Becoming a part of a traditional Indian family remains one of the most important of my experiences of India.”

Jude learned first hand of the inseparable link between Ayurveda and Indian family life and discovered that the women hold the balance of power within the family structure.

“The women start the day with a ritual bathing that is spiritually as well as physically cleansing”, she says. “Then they do their puja (prayers) and make he beautiful rangoli (complex chalk patterns that adorn the doorsteps of Indian homes).
These activities are given so much importance that if things do not go well for the family the women are likely to be blamed – for not connecting with the cosmos properly!”

The family’s health is also the responsibility of the women and the food is seen not only as sustenance but also as medicine. 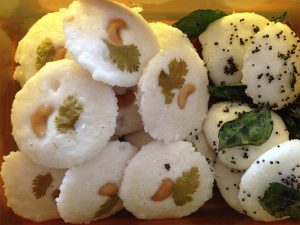 At meals in the Achar household Amah and her daughter would not eat with the men and guests, but would serve the food subtly supervise peoples choices. Jude quickly realized an invitation – “Jude, you have ghee?” – was also an instruction. She observed that Amah would ensure that she and Peter were served quite different combinations and quantities of the dishes prepared for a single meal, and the clever customising of the meal for the individual diners with different doshas (body types) followed Ayurvedic principles. Jude now realizes that throughout the visit Amah kept a watchful eye on the health of her two guests, using food to keep them well. The real potency of the food was brought to her as she watched Amah prepare “badam”, a bedtime drink, served with a promise of sound sleep. 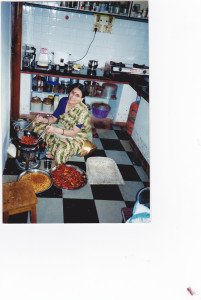 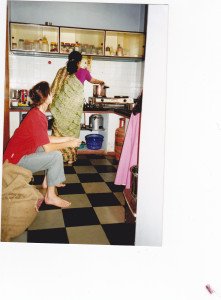 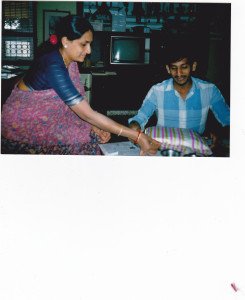 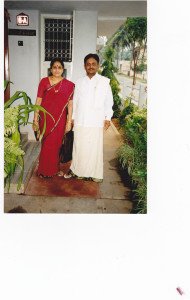 Car horns sound constantly at the busy intersection on which the Achar house is set and packs of howling dogs come on duty once the traffic thins, about midnight. Jude’s ear plugs and the natural exhaustion of intense Mysore-style yoga practice proved no match for the nightly din.

While Amah insisted that the street was “Not noisy, Jude. Very quiet!” she was quick to suggest a cure for the sleeplessness.

Indian kitchens feature marble floors and benches, the latter usually complete with a big, circular indent and a huge stone, for grinding. For Jude’s badam Amah quickly rendered almonds and cashew nuts, cardamom and coconut plus a splash of water into a sloppy mix, with a practiced rhythmical rolling of her grinding stone. (Jude subsequently tried and tried to master this action, but remained a hopeless beginner, she says.)

While the nut milk was set to boil in one pot, another pot was used to warm the milk, purchased fresh and unpasteurized that morning. The two were then combined along with Amah’s magic ingredient – toasted and ground white poppy seeds, a strong, natural sedative, related to opium.

Learning more about healing foods was a priority for Jude, on her second visit to Mysore this summer.

She received the information in an unexpected way.

This time she and Peter rented a house, mostly eating in restaurants, but making frequent visits to the Achars. Towards the end of the three-month long stay, Jude came down with a severe fever.

“I had a slight headache after practice, skipped breakfast and climbed into bed. I don’t even remember the next five days. But I was eight and a half stone at the start, and seven stone at the end”, she says.

The fever was an air-borne viral infection that tended to attack the “vata” types among the student population and saw more than one disappointed yogi head home early.

Jude stuck it out through sweats and stomach cramps, diarrhea and the frightening experience of being so weak she could not walk. She can joke – now – about the Monty Pyton aspects of fainting in the indian-style lavatory in the middle of one night and waking up with her face extremely close to some of Mysore’s more unusual plumbing!

It was in the days of convalescence that followed that she began to learn about healing foods, in the most personal way.

For several days she was allowed to eat only “conjee”, a type of rice porridge, flavored with cardamom. Then the prescription changed to “rasam”, watery but fiery soup, with spices, black pepper and dahl.

“That was designed to get the digestive system working again, so that there would not be a build up of toxins when I did begin to eat more solid food again, she says. “I am still reading Ayurvedic books and analysing the foods I was given, and why.

“I asked to learn about this – and I got the experience.”