Peter began his journey as an Iyengar Yoga student. He traveled to the Ramamani Iyengar Memorial Yoga Institute in Pune, where he developed a fascination and life long relationship with the art and science of Pranayama and the importance of alignment of yoga poses.

Introduced to Ashtanga Yoga in 1993, Peter met the living Master Sri K Pattabhi Jois in Mysore, India. Without hesitation and with complete faith and enthusiasm, he embraced Pattabhi Jois as his guru. Over a period of 20 years, he stayed with his teacher in India 18 times, living and learning yoga for two months per visit. In 1999 and 2002 he and his wife Jude Hynes hosted Pattabhi Jois’s visits to NZ. In 2005 they also hosted a visit by Guruji’s grandson Sharath.

Peter believes that yoga is a process of transformative change and not just a physical practice. Since the year 2000 he has been practicing Kumbhaka Pranayama plus meditation on the chakras along with his Asana practice. 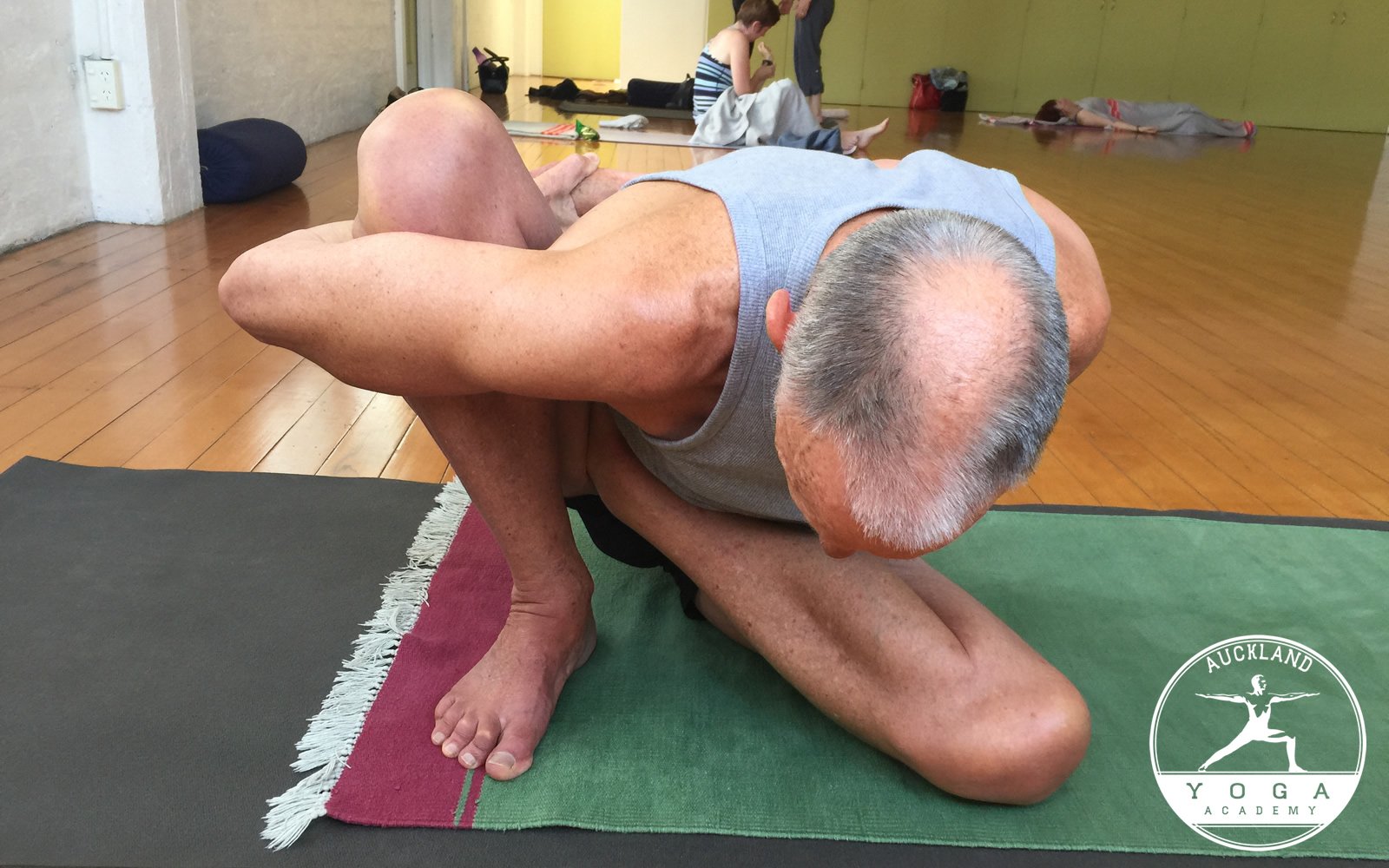 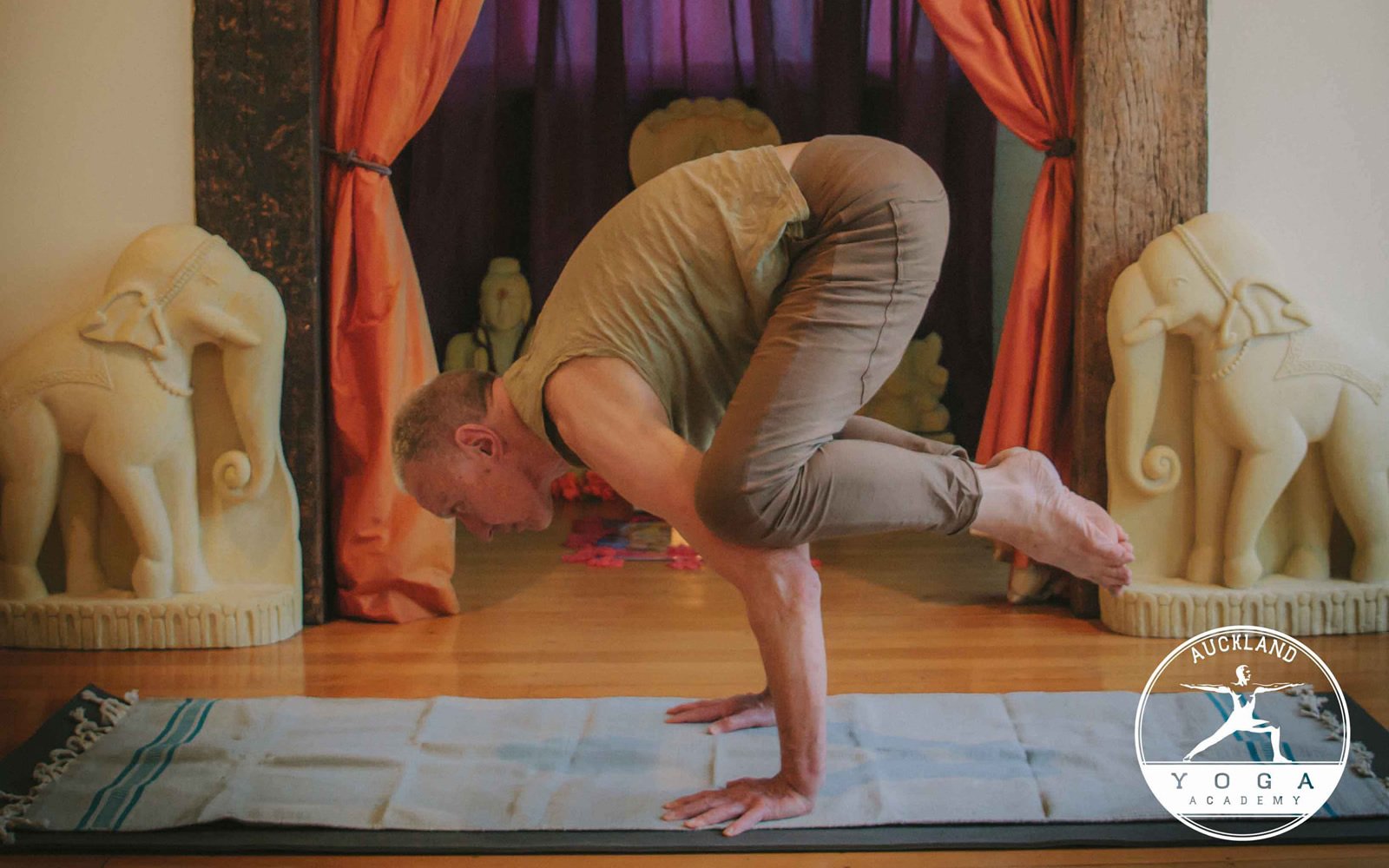 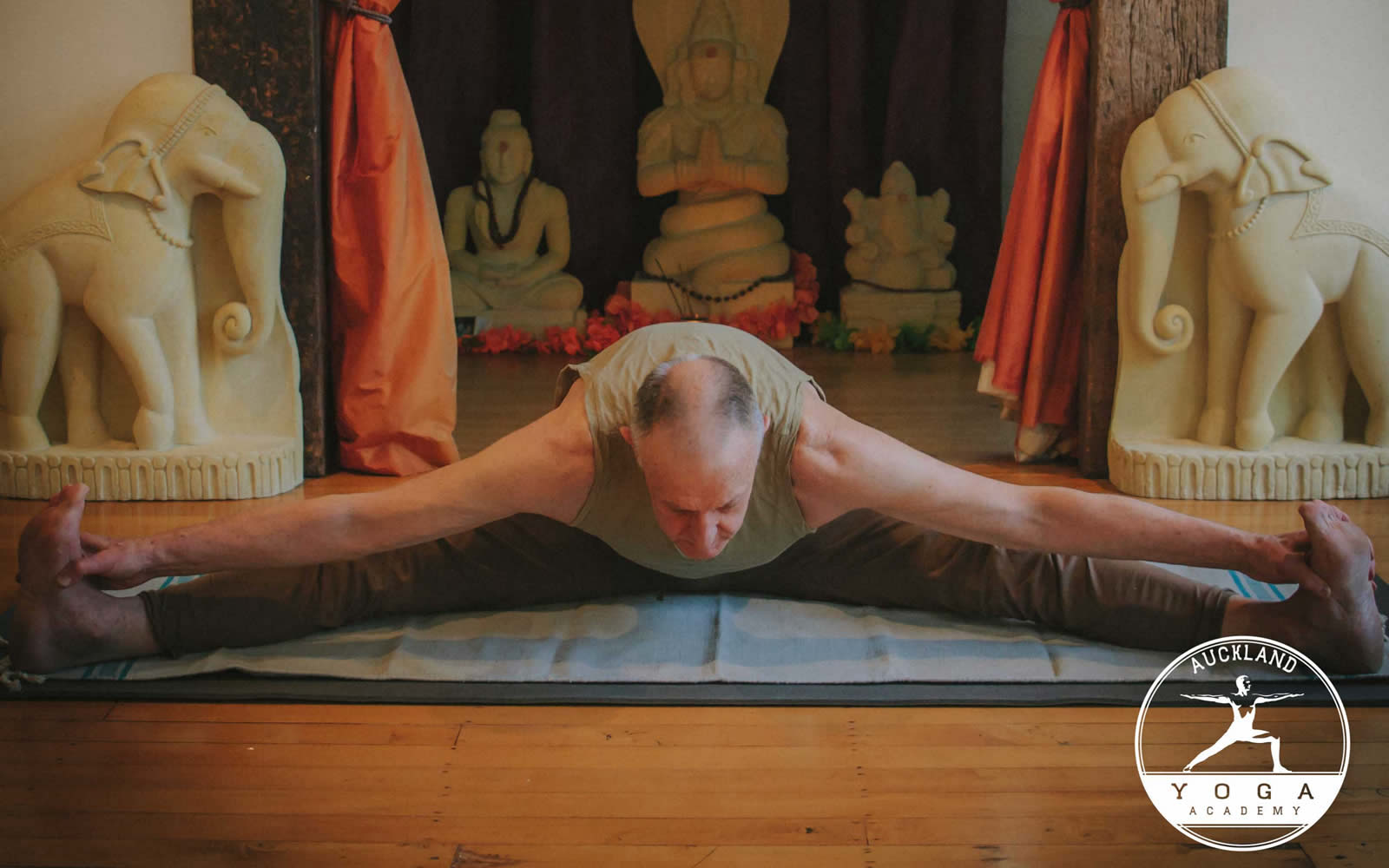 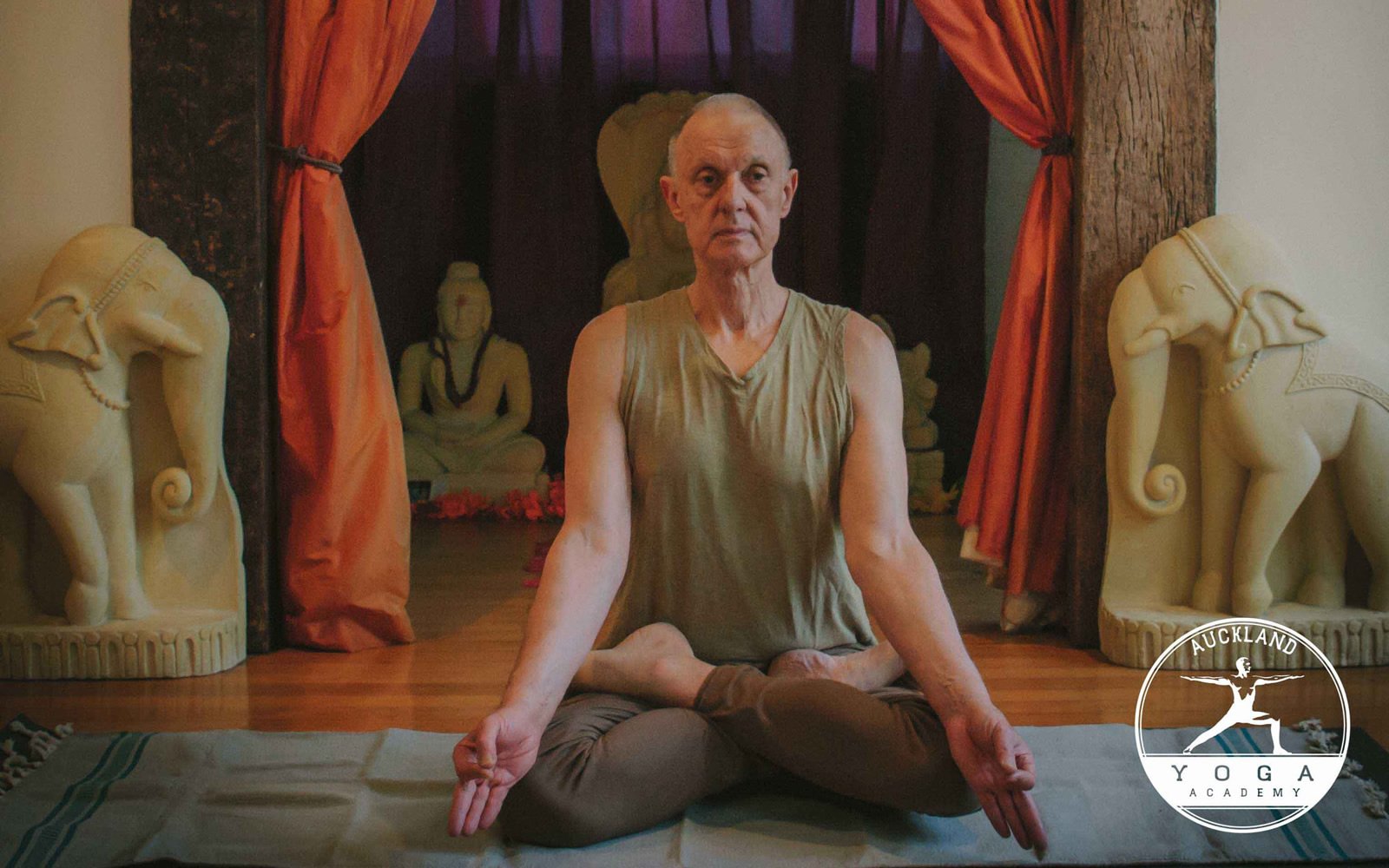 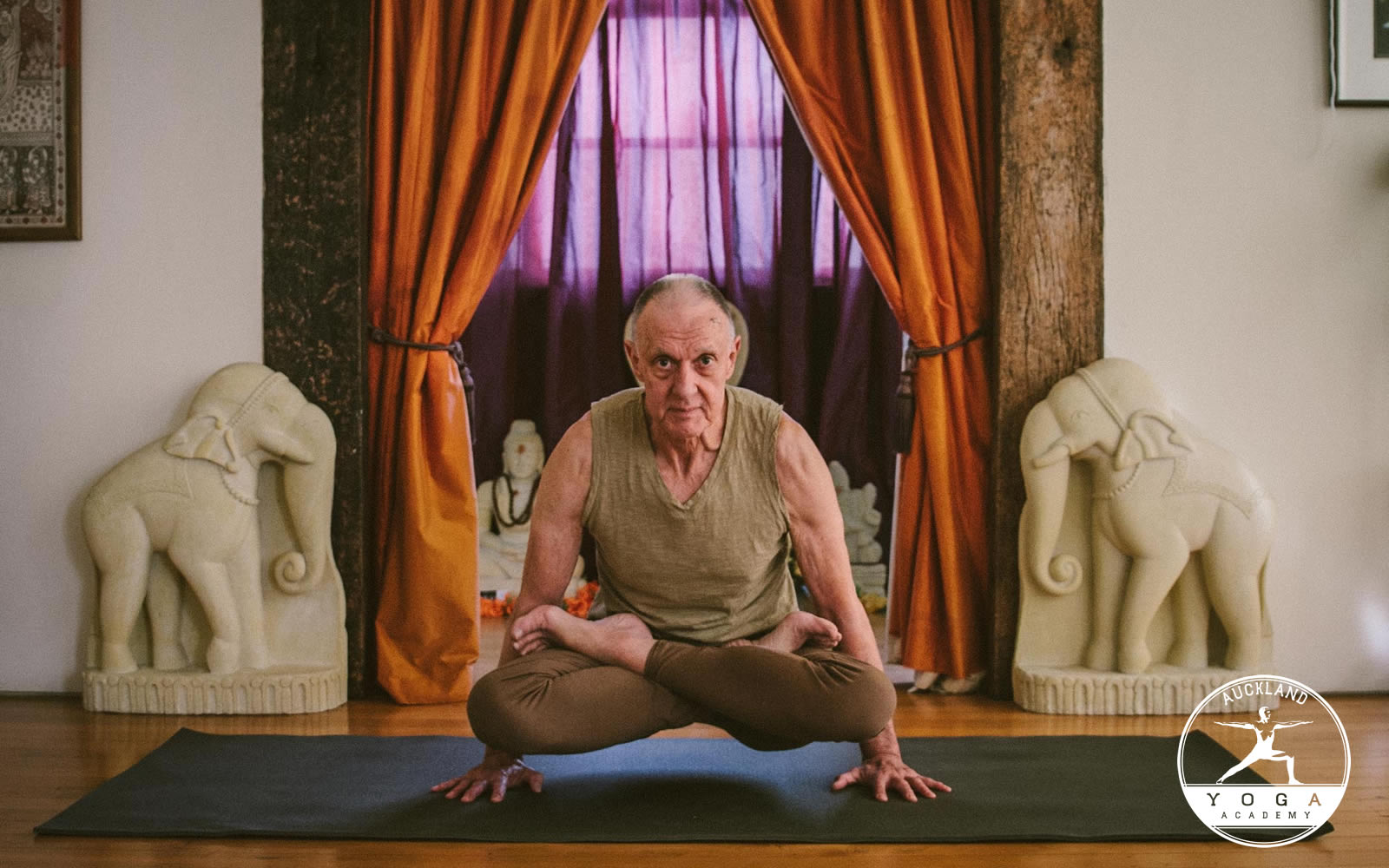 I damaged my back quite badly when I was 23 – a severe prolapse of my lumbar spine (the L4-L5 joint) – and I was in continual pain for several years. A guy called Stephen Gale had started teaching Iyengar yoga in Wellington and I went along to his class. It gave me instant relief in my lumbar spine so I kept going back. I went so often I fell in love with the practice.

I was working for the Wellington City Council as a civil engineer in those days. In 1979 I went to Adelaide to work. There I found Iyengar was more popular than in New Zealand and I met quite a few teachers who had been to India with Iyengar. I particularly enjoyed Margaret Strathern’s Iyengar classes and when I came back to NZ in the late 1980s, I decided to teach yoga.

I didn’t have any qualifications when I started – in those days there weren’t any – and started teaching on the North Shore, in church halls and community centres. In 1989 I passed the Iyengar Junior Introductory Teaching Certificate. Jude was one of my students in those early days. It was what I really wanted to do. In those days I would do my standing postures, inversions, headstands and backbends in the morning before going to work at 6.30am. After work I’d do my quiet forward bends and shoulder stands, and it kept me very well.

A lot of people were suffering from stress problems in the area I was working in but I wasn’t experiencing too much stress. But 1991 was a particularly difficult year for Downers and me, and I decided to leave. By then, Jude and I were in a relationship. She supported me while I opened a school called the Auckland Yoga Academy in Vulcan Lane in downtown Auckland, where we remained until 2000. The make-up of the classes was similar to today – about 80 per cent women and 20 per cent men. We started with only a handful of students but it built up quickly. In those days there wasn’t a lot of competition among yoga teachers and I was getting classes of 15 and 20 people – and sometimes up to 40.

Nowadays, if you go somewhere like Takapuna, there are several yoga schools and even shops specializing in yoga clothes. We’re still one of the biggest schools around but there are hundreds of small schools out there, and people teaching yoga in their homes. We’re also returning to private yoga, which is, of course, how the practice began.

In those days, you couldn’t easily buy yoga mats. Our very first mats were carpet underlay. We used to import this from Germany, and cut them up and call them yoga mats. Today, yoga mats are a multi-million-dollar business. In fact, I think people are making more money from selling yoga accessories than from teaching yoga, to be honest.

But back in the early 1990s few people were doing yoga. It was largely the result of three teachers – Krishnamacharya ‘s son, Desikachar, who was teaching viniyoga, a few people doing Ashtanga and a much bigger group doing Iyengar. Gradually Ashtanga gained popularity and Viniyoga also became quite strong.

Recently, the types of yoga coming out of America have dominated – Bikram, hot, flow, core and power, to name but a few.  We’re starting to refer to that as exercise yoga and that’s where the money seems to be. Young people seeking the “body beautiful” like it.   They do it in front of mirrors and sometimes you don’t even lie down afterwards. It’s very popular in gyms too. Unfortunately I think they’ve lost the basis of yoga – it’s meant to be a journey towards enlightenment. That always has been the fundamental practice and it always will be. If you’re not heading towards enlightenment, it’s just exercise. But there are still people who’re following the path, doing the eight limbs and looking for the spiritual side of yoga. It’s the same three schools, teaching Iyengar, Ashtanga and Vini.

My first trip to India was to study with BKS Iyengar in Pune in 1992 and a year later Pattabhi Jois in Mysore and two years later Jude and I went to Mysore together. I decided I wanted to do Ashtanga rather than Iyengar because of the more physical aspect and we fell in love with the yoga. We really enjoyed Pattabhi Jois and realized he was our guru. Your Guru is a teacher who shows the way to enlightenment. I was able to go to Pattabhi Jois’s feet on my second trip to Mysore and call him Guruji (my Guru) this was a result of the strong connection and love I felt for him from past Samskaras (strong residues from past lives).

We moved to our present premises in Federal St in Auckland in 2000 and hosted Guruji on two separate visits. All of us including our students and Guruji’s New Zealand Students enjoyed having Guruji and his family at our Shalla (yoga school). Jude and I especially enjoyed time and conversations with them. At that point Guruji asked us both through Joseph Dunham (his travelling support person) not to teach Iyengar, though we could continue offer it at our school . This was fine with us because we didn’t want to have the confusion of teaching Iyengar Style whilst studying Ashtanga.

I once asked him why I had come to yoga because I’d imagine anyone who came to yoga with just a sore back wouldn’t take to it as deeply as I did. Guruji said he believed it was about reincarnation, he thought most western yoga students were reincarnating from previous yoga lives in India.

I grew up in a family where there was no yoga, no philosophy. We were basically working class people – lots of alcohol, cigarettes and red meat – and, with me, it would have been the samskaras (imprints) from past lives which were very strongly biased towards yoga. Since then I’ve come to agree with him and embraced reincarnation. Guruji said it’s like cooking garlic – the smell and the taste always stays in the pot. In a similar way, I think I’ll always be drawn back to yoga.

On our trip to Mysore in 2002 we asked Guruji to marry us. In those days Guruji was marrying Ashtanga couples who had been long term students. He was a Sanskrit Professor and Priest, such a special time for us to be married by our Guru.

In recent years we don’t travel to India,  our last trip was in 2009 to Guruji’s funeral after which we realized that our many visits (18 times) were to enjoy being at the feet our Guru and now that he has passed away the India connection  was gone. We are continuing his teaching in Auckland through our Ashtanga Classes and our Retreat Centre, Stillwaters on Kawau Island which is dedicated to him. The Guru/student connection is never lost even after the Guru has passed away. We feel his presence in our Shala, especially in our Puja (prayer) Room where we have an Alter dedicated to him in where I include him in my daily prayers.

I would like to humbly share with you a brief summary of my yoga practice as it is today in my 74th year. Yoga changes and improves with age if you diligently continue on the path. As my guru the late Pattabhi Jois said, “Do your practice and all is coming”.

All thanks to my first teacher the late BKS Iyengar and my guru the late K Pattabhi Jois. Without these luminaries and without Guruji’s blessing I would have missed this wonderful path.